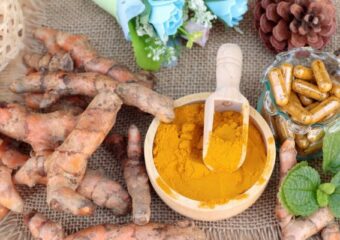 Turmeric is a commonly used spice in India. It’s the one used in curry but it also gained a lot of popularity among health enthusiasts, supplements companies and even in the medical world. It has been used by people in India and Southeast Asia for thousands of years to give colour and taste to foods. It was also in the Ayurveda medicine thanks to its healing properties. In the last decades, scientists were able to confirm some of the benefits of this plant, and that’s why it became so popular worldwide. In this article we’ll talk about curcumin vs. turmeric: what’s the difference?

The impressive health benefits of turmeric are mostly due to the presence of curcumin. So in most articles about turmeric and on the labels of most supplements you will find both terms. But… what’s really the difference between them?

As previously mentioned, turmeric is the popular a plant- based yellow spice. The scientific name is actually Curcuma Longa, and it’s a part of the ginger family. The turmeric root is harvested, cleaned, cured and dried, and it’s then sold in large chunks or fine grounded powder. Other names include Indian saffron, yellow root, yellow ginger or kacha haldi. We all know that lemons have a lot of vitamin C, spinach has a lot of iron, bananas have plenty of potassium and so on. Just like that, turmeric contains a lot of curcumin.

Curcumin is a naturally occurring chemical found in turmeric, and it’s the one that gives its colour and most of the health benefits. It is a part of the family of chemicals knowns as curcuminoids and they all have a bright yellow colour. Curcumin was discovered in 1815 and since then, there have been multiple studies that confirmed its health benefits. It is a great antioxidant and anti-inflammatory compound and does wonders for a multitude of health conditions. But more on that below.

How To Use Turmeric

Whether you choose to spice your meals with turmeric powder, make tea out of it or simply take it through capsules or liquid form, this plant can be very beneficial to your health. There is one thing to keep in mind though, and that is to always consume it together with black pepper, or to take a supplement that has this substance included. This is because turmeric usually has a poor bioavailability and it’s not easily absorbed by the human body.

This being said, Piperine, an active ingredient found in black pepper, makes curcumin more bioavailable and helps the absorption process so you can reap all of its health benefits. Scientists have studied a multitude of dosages, and it was found out that it doesn’t create side effects on most people, even at high dosages.

The usual recommended dosage is between 500 and 2,000 mg per day, broken down into 2 or 3 servings. Read the instructions on the product that you have bought, as each one may have a different concentration of active ingredients, and the number of capsules to take may differ from one product to another.

Results take time, and you need to take the supplement daily for 8 to 12 weeks in order to see some improvements. Results and side effects depend on age, activity levels, weight, other medication, the severity of the disease and the quality of the supplement.

While curcumin is usually safe, some people do get side effects such as bleeding or bruising, low blood sugar, kidney stones or gallbladder disease, stomach pain, nausea, vomiting, diarrhoea, constipation or allergy and a reduced absorption of iron in the body. If any of these symptoms occur, stop treatment and consult with your doctor immediately. The chances of developing any of these side effects are small, and as long as you stick to the daily recommended dose, you should be fine. The health benefits greatly overcome the possible negative effects.

So now you know the answer to the question: curcumin vs. turmeric what’s the difference? For a wide variety of turmeric products, you can check out this page.